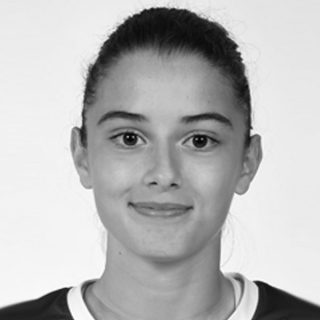 Ioanna Papatheodorou joined Panerythraikos fc academy at the age of 8 years old,. The following year, in 2012 and for the next 3 years, until 2015, she joined Kifissia FC academy, where they won 2 EPSA championships. From 2015 to 2020 she was part of the Atromitos women’s team (1st Women’s Category in Greece). In September 2020 she transferred to Nees Atromitou where she continued her career until August 2021. Her current team is the women’s soccer team of the University of Umass Lowell.

6 participations in 6 matches and 4 goals.

Captain of the National team with 3 participations and 3 goals.

Two inclinations in the Women’s National.

Junior high school certificate with a grade of 19.3/14

Currently studying Exercise Science at the University of Umass Lowell

Ioanna will discuss the challenges but also the rewards of having a career in Football along with studying in a top university. Meanwhile she will provide the audience with details about her pathway to success and the ways that a talented young girl has for reaching the top.