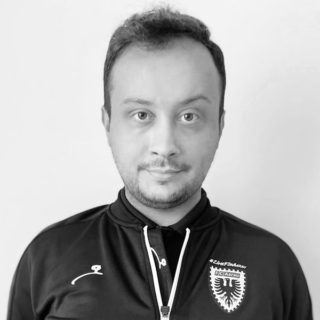 Sławomir Morawski is a holder of UEFA A and he is a tactical analyst with professional experience, focused on football intelligence and cognitive methodology of training.

Since November 2017 he has been cooperating with Canada National Football Team Head Coach Octavio Zambrano and as an analyst with WKS Śląsk Wrocław SA U17 – U19. Later on, in the age of 28, after 8 years of coaching he has joined Miedź Legnica SA [Ekstraklasa] as an assistant coach and video analyst, and after one season he moved on to Zaglebie Lubin SA playing in the same division. In January 2020 his work gained the interest of coaches from Liga NOS side – Portimonense SAD, where for two months he helped coaching staff as video analyst and consultant. He is currently working as an individual coach and analyst with players from top division clubs. He is also, a lecturer at sports university in Poland.

Through Mindfootballness Project he has gained recommendations and chances to meet and share his knowledge with people from the top level of professional football. Additionally, he is consulting and doing workshops with national teams coaches during FIFA U20 World Cup and he is speaker at international conferences and summits.

Sławomir Morawski will introduce us to tactical analysis. Specifically, he will present practical characteristics, areas of reference in analysis and collective, group and individual principles that must be followed.

He will give us his point of view in the use of analysis as a practical tool to develop tactical intelligence in football. The cognitive contents and processes of analysis on daily basis will be presented.