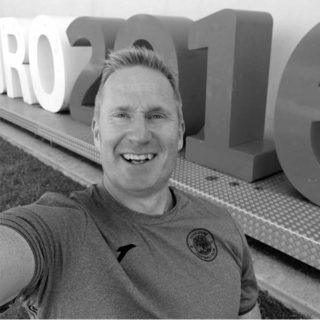 Thomas helped Liverpool FC improve from nr. 18 to 1 in the Premier League on throw-ins on under pressure, and score 14 goals after throw-ins situations in one season.

Gronnemark is still a part of the Liverpool team who won the Champions League and Premier League.

There usually are 40-60 throw-ins in a football match, and there is spend 15-20 minutes on throw-ins in every game. Most teams are losing possession more than 50% when they have a throw-in under pressure. Looking at these numbers, you should think that clubs through history had spent a lot of time on throw-in coaching – the answer is no!

Thomas Gronnemark started with his first Danish professional club Viborg in 2004. After working for many years with his “Long, Fast and Clever Throw-in Philosophy,” Thomas got his big international football breakthrough in July 2018. He got a phone call from Jürgen Klopp, who asked him to improve Liverpool’s throw-ins that were their significant weakness.

Since then, Gronnemark has worked with a lot of professional top clubs from all over the World. His throw-in coaching focuses on using the throw-ins all over the pitch to keep possession, create chances, and score goals. In this talk, Thomas Gronnemark will talk about his job as a throw-in coach and how he works with the coaches and players.