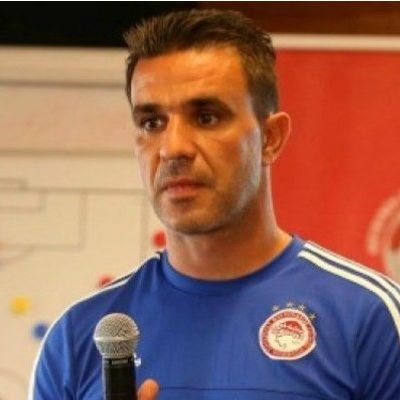 Anastasios Pantos is a former professional football player with a great career. He has combined his name with Olympiacos as he has been a player for 7 consecutive years having won 5 championships and 4 Greek cups. He was a favorite player of many coaches, with the greatest example Ernesto Valverde, who even invited him to attend training sessions in Barcelona.

As a footballer he has played in Proodeftiki and PAS Giannena where he left his mark also.

Anastasios Pantos holds a Uefa Elite Youth licence and has been working as a coach for the last 8 years at PAE Olympiacos, having trained all age categories. His best achievement is the championship with the senior team as an assistant coach. This year he won the Superleague championship with the U15 age group.

"Hybrid Systems and attacking organization: creating space and numerical superiority wide and centrally by opposite movements"

Anastasios Pantos will present the offensive  way of play based on hybrid systems in modern football, emphasizing the change of positions of players with opposite movements. From the training and the theory to the game.