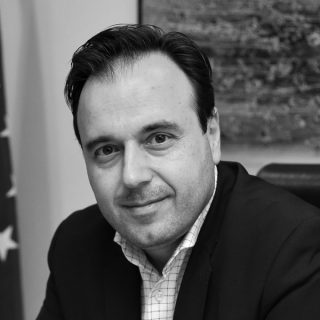 He was born in Trikala, in 1973 and he has studied Electrical Engineering and Computer Engineering. He has also designed and constructed several energy projects, in the private sector. In 2014, as head of the political combination “Restart Now”, he was elected Mayor of Trikala and re-elected at 2019. On December 2019, he was elected President of the Union of Mayors of Greece (KEDE).

His vision is creating smart and viable Greek cities, and strong and modern Municipalities. He ‘walks the talk’ as he moves around by bike and during his free time he adores music, he rests with computer programming, basketball, trips to mountains and traveling in general.